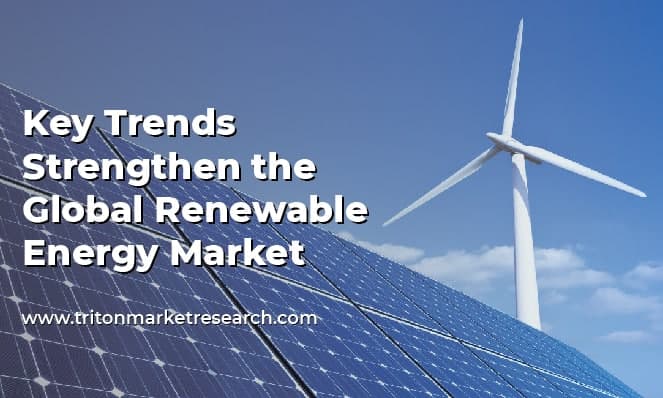 Electricity production from renewable energy sources has gained focus across various countries and is likely to maintain its momentum in the years ahead. In 2020, the greenhouse gas emissions lowered significantly, owing to the COVID-19 pandemic. This was considered a critical factor in accelerating the production of clean energy technologies.

The use of clean energy sources surged long before the pandemic, further quickened amidst the current scenario. For instance, the US Energy Information Administration stated that in 2020, the country produced 40% of its power with non-fossil fuel sources, lowering its dependency on fossil fuels such as coal, petroleum, and natural gas.

Additionally, as per the International Energy Agency (IEA) estimates, remarkably high capacity additions have emerged as the new normal in 2021, with renewable resources accounting for 90% of new power capacity expansion worldwide.

“Wind and solar power are giving us more reasons to be optimistic about our climate goals as they break record after record. Last year, the increase in renewable capacity accounted for 90% of the entire global power sector’s expansion,” said Fatih Birol, the Executive Director of the IEA, in a press release.

Among the developing nations, China is considered to be at the epicenter of global renewable sources demand and supply, amounting to approximately 40% of the global renewable energy capacity. However, any slowdown in the country is expected to be counterbalanced by robust growth across European countries, the United States, India, and Latin American nations. This is because of the growing government assistance and declining costs of solar PVs for installations.

Recently, the European Commission commenced the second phase of its EU4Energy program, promoting low-carbon and clean energy shift in the Eastern Partnership, which is a joint initiative between European Union and its Eastern Partner countries. This step will develop regulatory frameworks supporting the region’s energy transformation and digitalization of energy systems. Hence, generating new opportunities for energy companies.

What’s more, the US government offers a 30% investment tax credit to companies that opt for solar energy over fossil fuel for energy generation. Such steps to reduce environmental damage enhance the adoption of renewable energy sources across industries.

Over the years, the increase in human activities has contributed to the rise in carbon dioxide emissions, along with other greenhouse gas emissions. Hence, to tackle this issue, the world is shifting focus towards low-carbon energy sources, including nuclear and renewable technologies.

Solar Energy has emerged as the fastest-growing renewable source, with various economies thriving to expand their investments in the sector. For instance, the National Thermal Corporation Limited, an Indian government-owned electric utility company, is anticipated to commission the nation’s largest floating solar power plant by June 2022.

Hydropower contributes approximately 54% of renewable energy’s generation capacity. It has gained immense popularity, especially in the US and China. Earlier, the International Hydropower Association, in collaboration with various environmental groups, including the US National Hydropower Association, stated the development of hydropower technologies and rehabilitation of older dams while protecting overall water systems.

Wind Energy is a widely employed resource globally. In the UK, offshore wind farms generate power for around 4.5 million homes. This rise has compelled companies to invest in multiple wind energy projects. For instance, the General Electric Company announced that it had acquired an onshore wind turbine contract from European Energy for three wind farms, expanding its share in the wind energy sector.

With technological advancements, the cost of renewable sources has declined immensely in the recent past. In line with these developments, the growing production of electric vehicles holds the potential to reduce carbon emission levels, influencing the high use of solar and wind energy sources.

While the transformation is at an initial stage, the gradual shift towards clean energy production will transcend the carbon footprints over the next decade, leading to clean economic development.